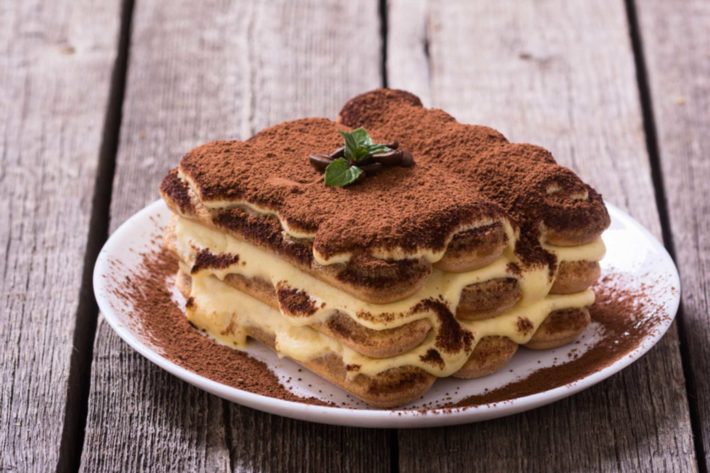 There are battles that are fought on the most disparate fields, just as there are others that end up in the kitchen and pit people against each other, neighbors who normally live peacefully alongside one another.  This is the case of the dispute surrounding the origins of the Tiramisù, historically contested between Veneto and Friuli Venezia Giulia, and fought with recipes and decrees. Between proof and tests, in fact, the matter ended up in front of the Senate to establish where tiramisu was really invented and its original recipe.

So let’s look now at the history of this dessert and the two recipes for preparing it at home.

The origins of Tiramisù, between Friuli and Veneto

For a long time,  it was claimed that the fresh dessert of mascarpone, biscuits and coffee was  invented at the end of the 1960s; that said, the study by two gastronomists, Clara and Gigi Padovana, allowed the invention of Tiramisù to be backdated and shift the origins a few hundred kilometers to the East .

In the book entitled “Tiramisù” edited by two experts, presented during the International Book Exhibition in 2016, we find the explanation of how the first traces of an original recipe for Tiramisù was before that, between the 1930s and the 1950s. There is some evidence according to which, in the 1950s this dessert was prepared in two places in Friuli, in Pieris di San Canzian and Tolmezzo. A revelation that brought the reaction from the President of the Veneto Region, Luca Zaia, who took action to defend the dessert’s Treviso origins.

The Veneto tradition of “Tirame su”

Until then, in fact the original recipe had been attributed to Ada Campeol who, with the help of the chef Paolo Lolì Linguanotto, first prepared this dessert at the restaurant  “Le Beccherie” in Treviso. The goodness of this kind of coffee trifle brought this dessert instant fame and it became widespread throughout the North East of Italy and then the whole country.

In 1983 the recipe was included in the recipe book of the food and drink expert Giuseppe Maffioli in his book “La cucina trevigiana”, while in 2010 a delegation from the Italian Academy of Cuisine  deposited a Deed containing the name, history and original recipe of Tiramisù.

Treviso fully embraced the popularity of this dessert, to the point where in January 2018 a project was launched aimed at building a real museum dedicated to Tiramisù. The aim was to gather testimonials, anecdotes and recipes handed down verbally to bring to life to an area which talks about the dessert and its relationship with the country. 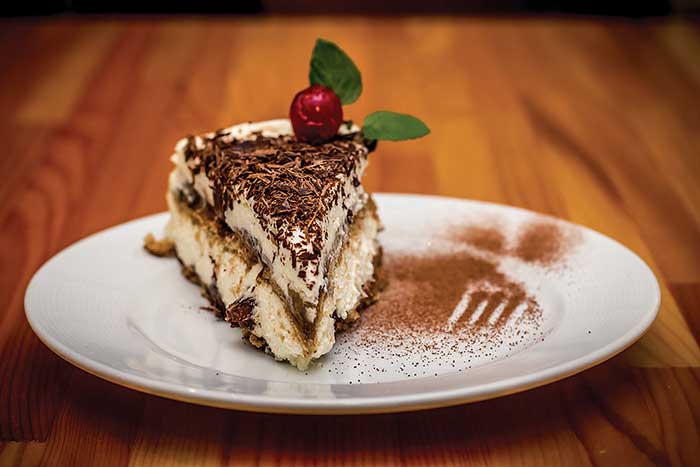 Tiramisù, the original recipe “of the Friuli grandmother ”

Even if the relationship between the Treviso area and the Tiramisù is very close, research confirms that the dessert was first prepared in Friuli Venezia Giulia. The disputes that followed the publishing of the study by the two Paduan gastronomists brought to light two crucial  testimonials to establish the real origins of the recipe.

The first story is that of Giuseppina, told by her granddaughter Patrizia Delponte. The grandmother worked in the restaurant “Vetturino” in Pieris di San Canzian, in the province of Gorizia. Signora Giuseppina worked there for 25 years, from 1930 until the Second World War, as the person in charge of making a semifreddo dessert called “tireme su” invented by the chef Mario Cosolo. Delponte also recounts that the idea of creating a desert with alternate layers of cream, biscuits and coffee came to Cosolo while he was on board the Savoy ship the Vittorio Emanuele III. A not insignificant detail is that this “tireme su” was prepared with cream and not with mascarpone, and this is one of the points most criticized by the Veneto faction.

A second testimonial, however, leads us to Tolmezzo in the province of Udine, at the foot of the Alps, where in the 1950s  the Fabbro family managed the Roma hotel. The son, Mario recounts that his mother, Norma Pielli, used to prepare a dessert called “Torino” following one of the recipes of Artusi. However, by following her creative inspiration, she decided to substitute the butter with mascarpone, the liqueur with coffee and the chocolate with cocoa powder. In fact, according to Fabbro’s testimonial, that’s how Tiramisù as we know it today, was born. At that time it was called  “Mascarpone slice” until in 1953, it was renamed “Tiramisù” by a group of tourists from Trieste, regulars at the hotel.

Tiramisù is from Friuli, the formal recognition

The evidence gathered over the years has led to the formal request for recognition of the  Friuli origins of the Tiramisù. A request granted by the Ministry for Agricultural, Food, Forestry and Tourism Policies who, in 2017, included in the Traditional Food Products (PAT) of Friuli Venezia Giulia. 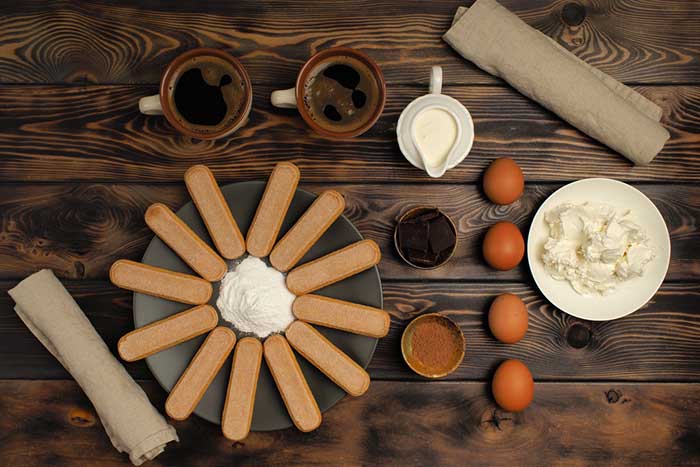 Finally we come to the recipe for preparing Tiramisù. Actually, so as not to miss out on anything, we are offering you two recipes: the one created by Signora Norma of Tolmezzo and that of  “Le Beccherie” in Treviso.

1. In a bowl, blend 3 egg yolks, 1 whole egg, the sugar and the mascarpone, stirring on one direction only.
2. Whip up the remaining egg whites and add them to the mixture.
3. Soak the biscuits in the bitter coffee and arrange them on the bottom of a baking dish.
4. Place alternate layers of soaked biscuits and a final cream layer to cover everything.
5. Leave to rest in the fridge for at least 12 hours and dust lightly with bitter cocoa powder before serving. 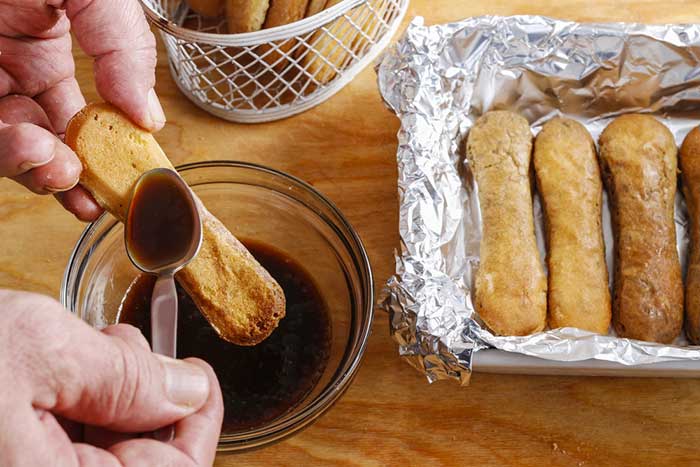 The recipe for Treviso Tiramisù

1. Beat together the egg yolks and the sugar.
2. Add the mascarpone to the mix and blend until you get a very soft cream.
3. Soak and drain off 30 savoiardi biscuits in the coffee which has cooled.
4. Cover with a layer of cream, arrange the other savoiardi biscuits on top and cover the surface with the rest of the cream.
5. Sprinkle everything with the light sieved cocoa powder and leave the tiramisù to rest in the fridge until serving.

Now there’s nothing left to do except try both recipes and let taste declare the winner! 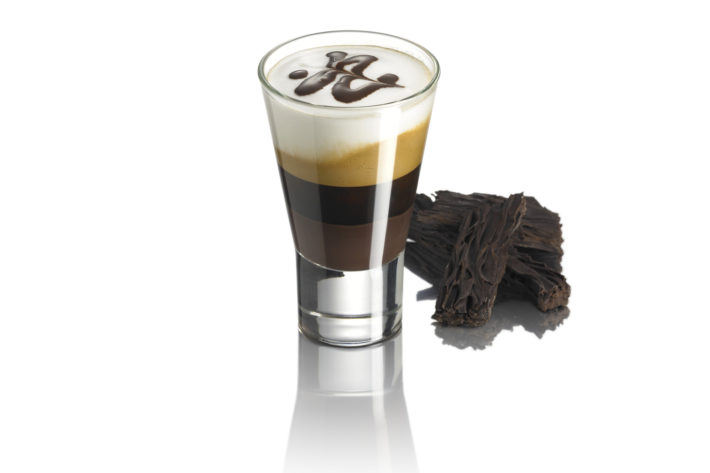 The Turin Bicerin: history and recipe

Dark chocolate, coffee, fresh cream: are the three layers of sumptuousness  which make up the Bicerin, the classic Turin drink that 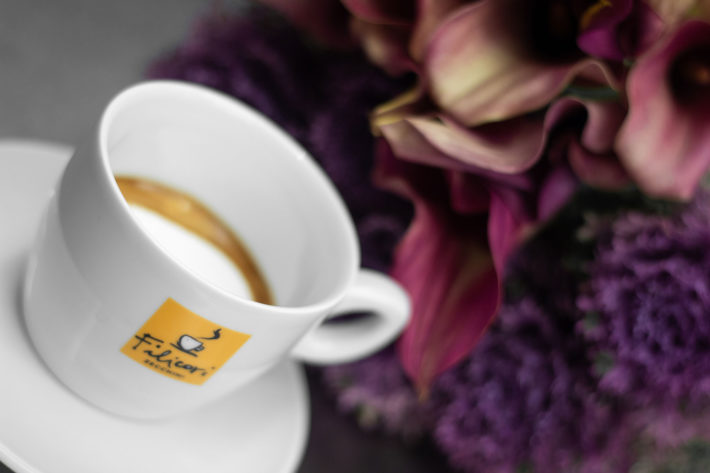 Il Macchiatone: background and recipe of the “cousin” of the caffè macchiato

It’s not a caffé latte, it’s not an espresso, or a latte macchiato and it’s not even a cappuccino: the Macchiatone brings together some characteristics from all of these drinks, but it has a well defined personality and identity of its own. 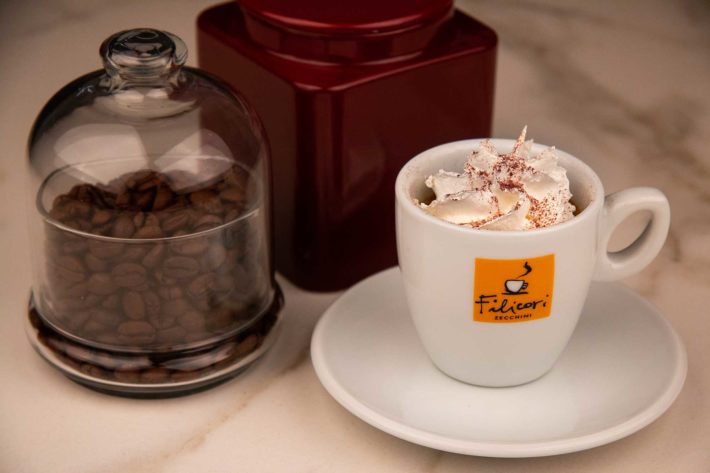 Coffee, cream, cocoa powder and a butter biscuit as decoration. The  recipe for Viennese coffee is certainly not difficult to prepare but, besides its ingredients, it is important to clarify many aspect …