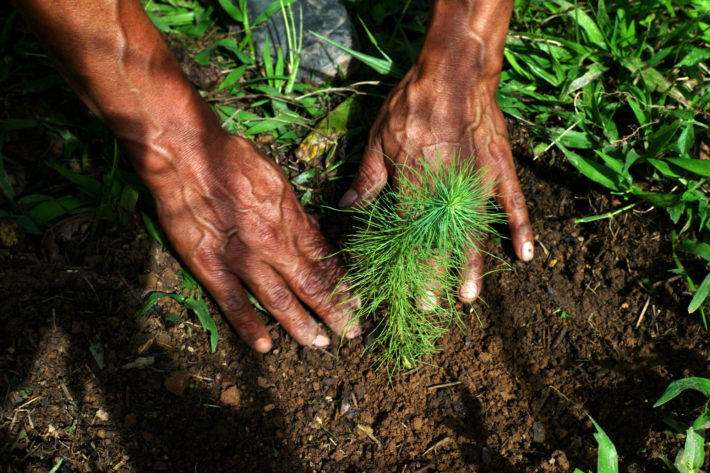 The circuit of fair trade coffee has grown a great deal in the last ten years, and still has significant margins for expansion. Via the certified brand name, fair trade coffee guarantees trading and growing which respect the rights and health of the workers, with sustainable production on an economic level, as well as on social and environmental levels. Many coffee roasters choose to take this route, like Filicori Zecchini with the new blend, Armonia (link); but what characterizes fair trade coffee and what guarantees does it offer? To find out, we interviewed Paolo Pastore, director of Fairtrade Italy, the organization which certifies the crops with the brand name FAIRTRADE.

When did the need to create a Fairtrade circuit for coffee arise?

The pioneers of fair trade started their activity of coffee importing as early as the 1970s. Coffee was actually the first food product to benefit from this type of trade which respects the growers, initially South Americans, in a period when the price of coffee beans was plummeting continuously and the farmers could not cover their production costs.

The first certified brands (Max Havelaar, TransFair, subsequently united under the single brand name FAIRTRADE) were created in Europe (The Netherlands, Luxemburg, Austria, Denmark) towards the end of the 1980s. In Italy, the first certified coffee TransFair was launched in 1995, then becoming part of the international brand FAIRTRADE in 2005.

What is the current situation of the coffee market?

Today, the question of the economic, social and environmental sustainability of coffee production is far from being resolved, despite the efforts of Fairtrade and other major players in the industry. The technical evolution for competing in the market, the knowledge to be able to deal with climate change and the generational turnover are the main challenges which the growers have to face today, as well as trying to earn a decent wage. We can say that the quantity of sustainable coffee sold in the world today is still too low, and this is obviously detrimental to the farmers in Latin America, Asia and Africa who grow this plant.

How is the Fairtrade circuit organized?

The Fairtrade system includes within it both organizations that represent growers and workers – the so-called Network of Producers – and the organizations of Consumer Countries, such as Fairtrade Italy, that I represent. These two areas are equally represented in the General Assembly of Fairtrade International. For us, this means creating a real alliance which goes to benefit everyone: the farmers, who can make a respectable living from their work, and the consumers, who can appreciate a good quality coffee.

How has the fair trade market developed over the years?

In the last 15 years, the quantity of green coffee imported into Italy via the Fairtrade circuit has gone from around 270 tons in 2003 to almost 812 in 2017, most of this is roasted, ground and sold in retail outlets. There is still plenty of room for growth, especially in the catering industry.

Apart from the quantities, since that time great progress has been made, above all in improving the quality of the coffee, with the recognition of awards also at international level. Furthermore, today 60% of the Fairtrade coffee sold in Italy is also certified organic.

What changes for the roasters who are part of the Fairtrade circuit?

From an operational point of view, Fairtrade is a product certification, and as such requires a whole series of things to beware of concerning the traceability of the coffee supply chain, from the importing to the packaging. The companies in this regard must provide evidence and traceability of all the operations.

The coffee roasters are subject to audits by FLOCERT, the certifying body, and pay Fairtrade Italy the license fees of the FAIRTRADE brand name to be able to use it on the packaging of their products and in communication.

What is the difference between coffee grown in the traditional way and Fairtrade certified coffee?

From the point of view of growing, the Fairtrade standards boost environmentally sustainable production and forbid the use of any GM substances. Furthermore, they give a higher bonus to producers of organic coffee, thus encouraging cooperatives to convert their production.

As far as the packaging is concerned, Fairtrade coffee can be recognized by the presence of the brand name FAIRTRADE and the obligatory declarations required by the Fairtrade rules for the packaging of certified products.

A traceable supply chain, guarantees for the customer, and greater consideration for the grower are the main characteristics of fair trade coffee, but what are the real advantages for the growers and which are the major markets for this product? Very soon we will look at this topic in depth, also talking about the Fairtrade Award, a sum of money which must be reinvested by the producers who receive it in improving production. Did you know about fair trade coffee? Have you ever bought it?